TDR Kotelnikov is a fabulous free VST compressor plugin and it is amazing that you can get this quality for free. For mastering it is one of the best free vst compressors around. However, if you’re not ready to reach for your wallet just yet, there are a great selection of free compression plugins that are capable of adding fantastic-sounding compression similar to the commercial plugins. Below are the best free compression VST plugins in 2020, that will give you professional compression without ever spending a penny. ReaEQ equalizer VST plugin is one of the best free plugins for music producers. Its a graphic equalizer plugin with lots of features that you generally get with a paid VST plugin. Here are some features of ReaEQ This IR based equalizer has Unlimited bands.

While most Digital Audio Workstations, or DAWs, provide youwith loads of great stock plugins, compressors included, you might be lookingfor some new ones that have a slightly different sound to them.

Well, I’ve put together a list of the best free compression plugins available which should definitely add some flavor to your mixes.

Note: I also wrote a post about the best compressor plugins in general, not just free ones. So, make sure to check it out as well!

Let’s get straight to it…

With just two basic controls, “Compression” and “Make Up”, the MJUC JR. makes controlling the dynamics of the song extremely easy.

Also, there’s the three-position timing switch which not only controls the attack and release of the unit, but also the slew rate of the transformers and the timing of the other parts of the circuitry, that are directly influencing the generated harmonics (saturation).

I use this one the most when mixing really simple stuff like acoustic guitar plus vocals.

As far as simplicity goes, the MJUC Jr. just can’t be beat, and it’s one of my favorite compression plugins of all time.

MCompressor isn’t just a simple compression plugin with a couple features, since it allows you to fully customize the shape of the graph which gives you the opportunity to be really creative.

With such a high number of controls and features, it ends up being one of the more versatile compressors out there, especially when comparing it to the majority of free ones.

It can handle mono, stereo and even 8-channel surroundprocessing which really comes in handy when mixing for films or movies.

Learn more about the M-Compressor here.

Looking for free guitar VST plugins? Here are the 15 best ones.

ReaComp by Cockos (Windows Only)

Cockos, the creators of the Reaper DAW, have a couple free plugins that you can download to use with any DAW you want, and they are fantastic…

And, or course, they do have their own free compressionplugin.

This is a very simple to use yet powerful plugin and it should be a great addition to your arsenal.

The interface isn’t anything to brag about, but it gets the job done perfectly!

When comparing it to most other compressors, I’d say that there is a bit of a steeper learning curve to it.

Learn more about the ReaComp here.

If you’re looking for the best free VST plugins in the world, I have a list of 225 of them.

The DC1A is one of my favorite compressor plugins, just slightly behind the MJUC Jr. and the TDR Kotelnikov.

It is, essentially, a stripped-down version of the DC8C, which is a premium compressor by Klanghelm, but with just two controls.

What makes this such an appealing compressor is that it only features two controls; Input and Output.

The input controls the level of the incoming signal and the output simple lets you choose the resulting volume.

Basically, all you have to do is increase the input and let the algorithm do the rest!

Additionally, thanks to the “DEEP” control, the DC1A is excellent at dealing with bass-heavy audio, since it activates a high-pass filter, and it comes with some extra features, like parallel compression and dual-mono processing, which lets you compress the left and right channels independently.

Just like all other Klanghelm plugins, you can click on the “OUT” or “GR” buttons under the metering section to view the compression that is being applied as well as the output level.

If you are a beginner and need an easy-to-use compressor for your tracks, don’t hesitate to try out the DC1A.

On their website they call Molot the “compressor withcharacter”… 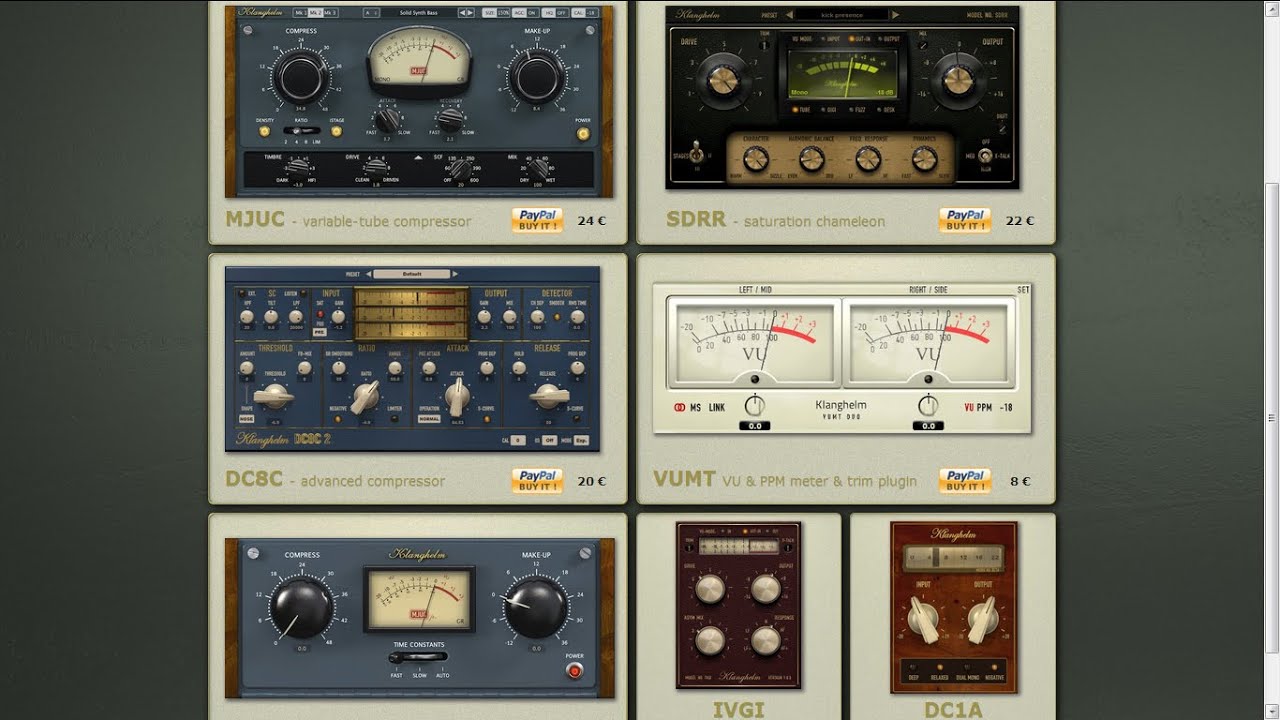 This is because it adds a lot of coloring to the sound, which most of you might not want that much, since it will change the way the source originally sounded.

Not only that, but it’s pretty complicated to use properly…

So, if you’re looking for a simple and transparent soundingcompression plugin, Molot is not for you.

However, if you want one that adds a lot of character to your track and that allows for deep customization, like parallel compression, definitely check it out.

Looking for free Drum VST plugins? Here are the best ones.

Rough Rider is a modern compressor with a bit of “vintage” style bite to it and a uniquely warm sound.

This compression plugin was designed to mainly be used onthe tracks that can add some punch to your music;

E.g. The rhythmic tracks, such as drums, but also bass, synth bass, guitar, and more.

In addition to the typical compressor controls, Rough Rider 3 also features a Mix controls for Parallel compression as well as a High-Pass Filter.

Rough Rider is one of the most used free compression plugins out there, and for good reason; it sounds fantastic and it can add some serious punch to your music.

I especially liked it for the same reason I like the MJUC Jr., and that reason in SIMPLICITY!

I don’t want to have to deal with loads of knobs and parameters, since this usually results in option anxiety and wasting too much time.

I want my compressors simple, to the point, and effective, and Rough Rider definitely fits the bill.

Xfer Records OTT is a free multiband upwards/downwardscompressor used by many dubstep and electro producers.

It’s a very popular plugin in dubstep and electro productions for the simple fact that it has an aggressive-style of compression.

This means that if you need a compressor that really glues everything together, and I mean “duct tape around your head” type of gluing, then give it a shot!

Now, I wouldn’t recommend it for bus compression, since you want to go gentle there, but if the song needs that sort of compression, then by all means!

Additionally, it’s fairly simple to use and it’s also pretty light on the CPU.

Looking for free Arpeggiator VST plugins? Here are the best ones.

DCAM is modelled around a classic console bus compressordesign and is intended to be used to “glue” mixes and subgroups together whileenhancing punch and definition.

It can also tame peaks and create pumping compression on individual tracks; however, it’s one of those compressors that can certainly be used on the master bus to give your song that last punch and sonic glue it needs.

Note: You must register with their site and get avalid serial to use it, even though it’s free… yes, really!

It’s still worth doing it, so try it out!

Looking for free EQ VST plugins? Here are the best ones.

Note: The Website is in German, but the download link is easy to find; However, you can always use the browser’s built-in translation tool to navigate the site in the language you desire.

The AC-1 compressor plugin allows for both subtle compression and a extremely hard and punchy one.

It comes with all the regular compression settings like; attack, release, ratio, knee, etc. which makes it really simple and easy to use; Again, no unnecessary controls to slow you down.

Just try it out for yourself and tell me what you think.

The whole point behind the SAFE plugins by Semantic Audio is to provide the user with an easier way to control the plugins by using semantic terms such as “warm, bright”, etc. to make the whole process more intuitive.

You just type the word in and it adjusts the settings automatically.

This can be useful, especially to beginners, but once you know how to dial in compression like most producers do, you won’t really have a need to use the semantic terms.

But I think that it can be a good plugin for beginners to start figuring out how to use compression in their mixes.

On their website you will not only find a compressionplugin, but also an overdrive, EQ and reverb.

Give it a try!

If you’re looking for a VERY simple compression plugin, thenlook no further…

FRComp 87 only has two knobs; Threshold and Make up.

It also allows you to choose between fast, medium and slowattack and release.

And the last feature it provides is a Limiter…

And that’s it, believe it or not!

If simplicity is your thing, then here you go!

Looking for free Delay VSTs? Here’s a post I wrote about the best ones.

Contrary to most compressor plugins in existence, this one doesn’t try to emulate any existing hardware compressors, quite the opposite in fact.

Named in honor of Vladimir Kotelnikov, who was a pioneer of digital sampling techniques, this plugin is purely digital and uses complex algorithms to provide the best control possible over the dynamics with minimum added color, which is something you may or may not like.

You have access to two different versions of the plugin; the free one and the “Gentlemen’s Edition” which costs $44.

What sets Kotelnikov apart from most other compressors, is its “Frequency Dependent Ratio”, which allows you to set a different compression ratio depending on the frequency (not available in the free version).

A similar feature is the “Low Freq Relax” that allows you to configure a high-pass filter for the side chain, which makes the compressor react less to those lower frequencies such as kick and bass, and this one can be found both on the free and premium versions of the plugin.

In other words, when using the “Low Freq Relax” feature, you are effective lowering the threshold on the lower frequencies.

Another feature are the Ying and Yang controls, which add harmonics to the lower and higher frequencies respectively.

Lastly, when processing stereo channels, you also have the option to only process the Sum or Difference channels, otherwise known as the Middle or Side, and you can even use two instances of this plugin to compress the Mid and Side independently.

This plugin clearly does a hell of a lot of things, but it does them right, and for only $44, or even free, I honestly can’t complain.

Any of these plugins should make a great addition to yourarsenal, just remember that some of the ones on this list are extremely simplewhile some others are actually quite complicated to use and are packed in features.

Depending on your needs you should choose one or the other…

Still, since they are all free, I’d recommend you to try outas many as possible.

I hope this was useful!

Have a great day!