The sequencer is designed to distribute as evenly as possible a certain number of beats in a given number of steps. Simply put, with RhyGenerator One you can create a rhythm, consisting of up to 32 steps, it comes in the standard VSTi for VST and VST3, as an instrument for AAX and a midi effect for the AU version.

Audio Vitamins give up the development of their creative random powered MIDI step sequencer plugin Stochas and clear the way for the open-source community.

Developing a plugin well and promoting well are two things. A developer can design a fantastic plugin, but at the same time sell it poorly (marketing, etc.) The example of the young plugin company Audio Vitamins shows that this balancing act between developer and seller is not so easy. Due to the lack of time to devote to marketing its Stochas step sequencer plugin, the developers have recently decided to release the source code of its previously available commercial product. The source code runs now under the GPL license and is open source.

Stochas is a MIDI step sequencer plugin that features a big randomization features palette that makes sequences more lively and exciting. Almost everything can be randomized and not only the whole piece but also only in a certain area of the sequence. For example, you can random specific notes in a sequence, random the note start times, velocity, length, and more. Stochas allows you to create up to four layers /up to eight patterns with different time signatures, playback speed, and number of steps per layer. So a super deep sequencing tool with which you can work creatively for a long time and for free.

The original idea sprang from a JSFX plugin (Reaper plugin) created by Andrew called Stochasticizer which allowed semi-random sequencing of melodic and drum lines. Andrew was contacted by Dave who suggested creating a plugin that would work on any DAW. The two worked together to design the product which was released a few months later.

Due to lack of time to devote to marketing a commercial product, in 2020, it was decided to release the software as open-source in the hope that it would be useful to music producers around the world.

Audio Vitamins Stochas is now open source and available as a free download for Windows and Mac (VST/AU). The source is available in a GitHub repository.

Providing an alternative approach to sequencing inside your DAW, this article lists the best free step sequencers which can be loaded as VST plugins in any capable VST host application.

Most music producers nowadays use the piano roll as their primary tool for sequencing “inside the box”. I know I do! But as intuitive and useful as the piano roll is, it is definitely not the only possible method of sequencing your virtual instruments.

Why use a step sequencer instead of the piano roll? The short answer to that question would be – changing your routine. I’m not saying that step sequencers are better than piano rolls or anything like that. The idea is simply to try something new and see how it fits your workflow. In a way, a step sequencer is your perfect companion when programming a synthesizer. It offers a certain amount of flexibility which you won’t find in a basic piano roll and opens lots of room for experimentation.

For example, let’s say you’re using a step sequencer to create a new synthesizer riff. You’re also in the mood to experiment and thinking about programming a new synthesizer patch. After you input some notes for the initial sequence, a step sequencer lets you loop certain parts of that sequence, change the loop points, change the note length on the go, skip a number of steps, make the sequence go faster, make it go slower, randomize the sequence, etc. While a piano roll relies mostly on the paint tool and copy/paste commands, a step sequencer allows you to treat your riff almost as a synthesizer patch. You can really go crazy with it and sometimes even doing something by accident can lead to a great new musical idea.

One thing a piano roll can’t do is control your virtual effects. Certain step sequencers can do this by sending different MIDI CC values to your effect plugin of choice. This way you can turn your favorite filter into a step filter, or turn a simple volume fader into a trance gate effect. 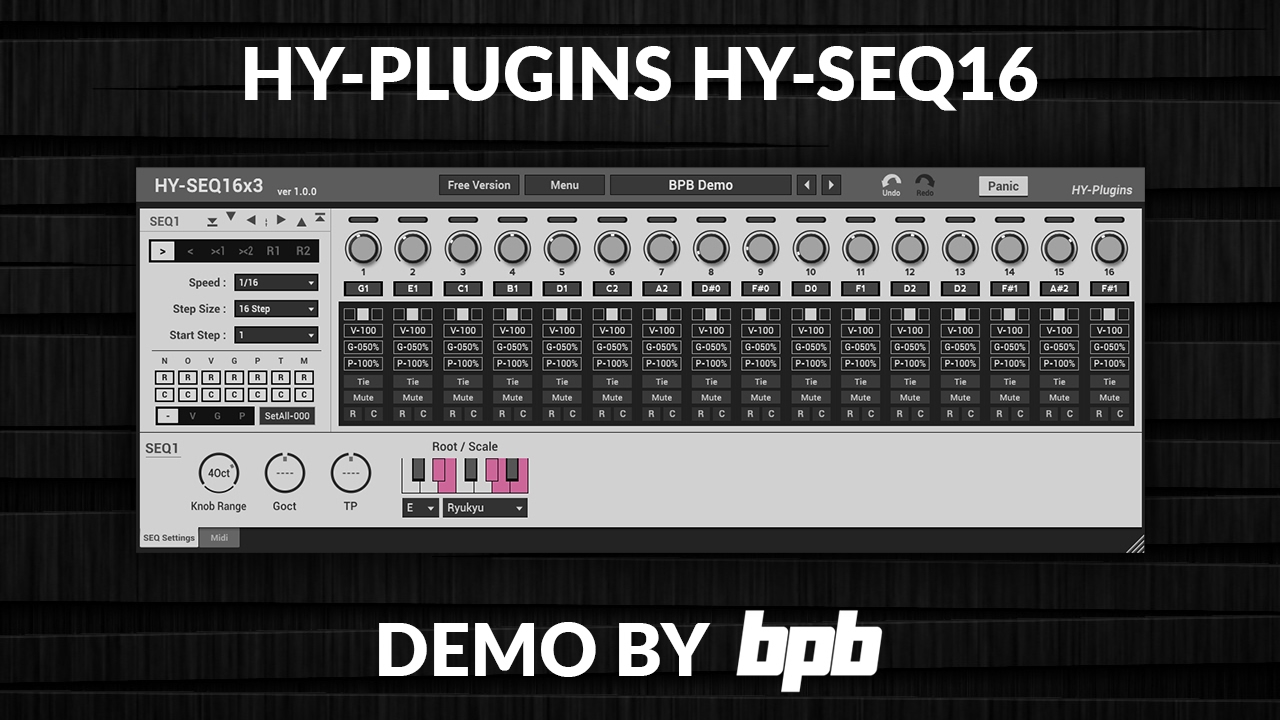 Read on for a list of the finest freeware step sequencer plugins, as well as an in-depth look at my favorite ones from the bunch. Enjoy your stay and please share this article if you find it useful. It really helps BPB grow!

The step sequencers are listed in alphabetic order. Follow the links for screenshots and official download locations for each plugin:

* Logic Pro Basic Step Sequencer is a script for Logic Pro X. It runs as a standard MIDI effect. Installation instructions are included in the download.

** Sequencer Baby V2 is a JS plugin for Cockos Reaper. The thread linked above contains installation instructions and tips.

I’ve spent an awful lot of time playing around with Step Machine, so I’ll mention it here first. This neat freeware step sequencer VST plugin was developed by Rory (aka Rozzer), a professional musician and sound designer who currently works for FXpansion and runs Boxed Ear.

The clean layout and intuitive interface make Step Machine a good candidate for your first step sequencer plugin. All the basic features are there, including a handful of extra goodies. The pitch is controlled using a large tone matrix and a smaller step sequencer which controls the octave of each step. Additional controls include velocity, gate, glide, and two user assignable MIDI CC parameters.

Most of the values can be randomized, which is a welcome feature when you’re in the mood for a synthesizer jam. Step Machine also offers transpose via MIDI and supports changing the speed in relation to the host’s tempo. My only gripe with the plugin is that the usual controls for parameter reset don’t work. Each parameter has to be reset by hand, which isn’t really the best option in terms of workflow.

Step Machine works flawlessly in my MuLab setup, however the developer has noted that the plugin misbehaves in certain hosts. Give it a proper test before using in any important projects.

If you’re looking for a simple matrix sequencer to trigger your virtual instruments then Blip2000 will probably suit your needs perfectly. Inspired by hardware matrix sequencers such as the Tenori On, this freeware plugin by WOK offers a streamlined set of features in a nice and stable package.

The GUI features a large 16×16 matrix which is used to control the pitch, playback settings, and global controls for note length and velocity. The button labeled CLR resets the tone matrix. Maximum sequence length is 16 steps. The plugin can output notes to any MIDI channel, which is a good feature to have when working in a live setup. This way you can easily switch between different instruments on the go.

Having the ability to control velocity or any other MIDI parameter using the tone matrix would have been an awesome addition, but unfortunately this isn’t the case. On the other hand, I like the fact that Blip2000 is capable of playing the sequence regardless of the playback state of the host application.

Blip2000 is free to download and use, however a nag screen will show up every time you launch the plugin. Donate to the developer to register the plugin and remove the nag screen. If you like this plugin, you should also take a look at it’s smaller sibling Blip1000 by the same developer. It comes with a smaller tone matrix, but offers some cool additional features like shuffle and MIDI learn.

Pros: Polyphonic, easy to use, runs smooth in most hosts.

Like a quad-core processor surrounded by pocket calculators, MIQU 01/16 stands out from the freeware step sequencer crowd in terms of complexity. Klangmanipulation has created a step sequencing monster, offering so many features that you’ll definitely need to take some time and learn how to use this plugin properly.

The included user manual in PDF format is definitely a good place to start. It is well written and describes the functionality behind each component of the plugin. MIQU 01/16 features eight sequencers (pitch, octave, slide, velocity, pan, and three editable by the user), up to 16 steps per sequence with different play modes (forward, bounce, random, etc.), three MIDI LFOs, and loads of other goodies.

The plugin also comes with a built-in bassline synthesizer which you can use to create those classic acid bass riffs. Of course, the MIDI output allows you to control virtually any software instrument or effect in your DAW.

Definitely not for the faint of heart, this plugin offers almost everything one would need from a step sequencer. The provided demo video which shows MIQU 01/16 in action can offer you a good starting point when dealing with this plugin for the first time.

Unfortunately, it seems like there aren’t any freeware step sequencer plugin for Mac. Although that totally sucks, here are a couple of cheap solutions for the Mac crew. Logic Pro X users can download the step sequencer script which is included in the main list.

OR-1m is a neat step sequencer for Mac which can be purchased for $24.95 via Orwell Digital. It is a 16 step sequencer with per step control for velocity, pitch and note duration. For a quick overview of the features, take a look at the official demo video.

b-step is a streamlined step sequencer designed for improvisation and live use. The plugin is priced at €19.99 and a free 30 minute demo version is available for download on the developer’s website. Watch the demo video to see the plugin in action.

Here’s an example of the amazing music you can create by sequencing two simple Korg Monotribe synthesizers and passing them through a delay effect. The video is a great watch if you’re trying to get that classic Berlin School sound of the 70s. An interesting synthesizer riff and a bit of delay can really go a long way.

No sequencer related article can go without mentioning Pink Floyd and their famous On The Run synthesizer riff. In the video below, Roger Waters and David Gilmour explain how they used the Synthi A analogue synthesizer to create the iconic riff. Search for “on the run synthesizer” on YouTube and you’ll get dozens of videos in which people recreate this riff on different synthesizers. Click here to see an Alesis Ion getting pretty close to the original sound.

Finally, here’s a little sequencing jam with Moog Sub Phatty and the Q960 step sequencer. This is one of my favorite methods of jamming with a synthesizer. Hook it up to a step sequencer, play a sequence and tweak those knobs! It’s always a good idea to record sessions such as this one and cut out your favorite loops later on. You can often create enough material for a couple of tracks during one session.

An article about freeware step sequencers has been requested numerous times by multiple readers and I would like to thank Suleiman and V’ger from Reaper Forums and BPB readers Arkmabat and UserFX for helping me gather the materials for writing this article.

To anyone reading this, your comments are more than welcome! Let me know what you think about the listed step sequencers and feel free to post your own suggestions in the comments section below. Finally please share this article if you find it informative. Thanks for reading!